Together The People First Wave Of Artists Announced

Tokyo World returns to Bristol for another instalment of one of their incredible events. S...

Bristol Cocktail Week is returning to our doorstep for the 5th year running next week, and we cou...

After the huge success of last year’s inaugural Together The People Festival at Preston Park in Brighton, Independent Brighton promoters One Inch Badge have confirmed the legendary Brian Wilson (Beach Boys Co Founder) as their first headliner for TTP16.

Brian Wilson will be joined by former band mate Al Jardine and their band to perform a UK Festival Exclusiveof the classic album ‘Pet Sounds’ in full plus an array of fan favourties from The Beach Boys catalog and Brian’s solo career!!

Widely regarded as the record that changed the history of pop, this show coincides with the fiftieth anniversary of the album’s release. Originally released in 1966, ‘Pet Sounds’ is universally hailed as one of the greatest albums of all time and this is an historic opportunity to see it performed by one of its original composers.

Brian Wilson will be joined across the weekend by an eclectic range of acts including experimental garage punk outfit The Horrors, self-termed future soul band Hiatus Kaiyote, Brighton’s adopted son Gaz Coombes, Turin Brakes, Songhoy Blues, Natty and many, many more still to be announced. In addition to the musical line-up, the festival will offer a variety of other entertainment, including dedicated line up for kids!

The family-friendly festival is open to all ages and will host three (3) music stages and welcome back the Incredible Moving Picturehouse Cinema. 2016 will also see the return of the Soapbox stage hosting a selection of talks, debates, poetry, spoken word and acoustic performances from local contributors and beyond.

Together The People is an independent, greenfield, non camping, music and arts festival taking place in Preston Park, Brighton on Saturday 3rd and Sunday 4th September 2016. The primary focus is to celebrate music, food, community, film and arts within the city of Brighton by delivering a high quality, creative, family friendly and socially aware event. In 2015 the festival was powered by bio-diesel & solar technology, re-cycled over 5.3 tonnes of waste and generated over £2,000 in public donations for local homeless charity ‘Brighton Housing Trust’.

The festival has been created by a group of passionate, independent; Brighton based businesses and individuals, including leading local concert promoters One Inch Badge and legendary local music venue Concorde2.

PLUS MANY more acts still to be announced

Limited Saver ticket can be purchased via the following outlets… 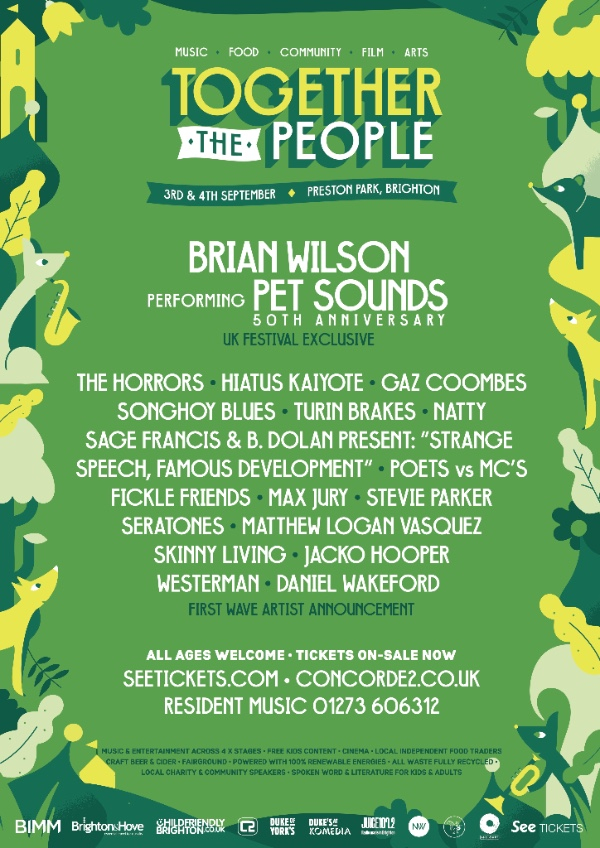